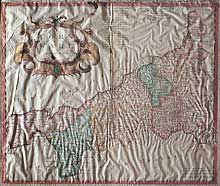 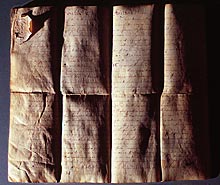 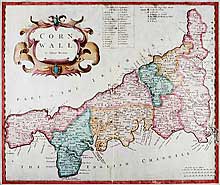 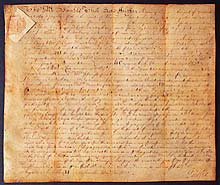 Planar distortions include cockling, buckling, waves, curling, folds, wrinkles, and creases. The engraved map of Cornwall shown at upper left exhibits extreme cockling. At some point in the past, the map was placed in a frame that was not quite large enough. Moisture was subsequently introduced (probably in the form of high atmospheric humidity), causing the paper to expand. Constrained by the frame, it could not expand outward and instead "bunched up," forming a classic cockled pattern.

The 18th century land deed at lower left is made of parchment (animal skin) and had sharp creases from being folded for many years. (Parchment commonly exhibits cockling, as well.) Although the chemistry, character and behavior of parchment objects are quite different from those made of paper (which is plant fiber), these documents are treated at CCAP.

Planar distortions in paper and parchment can usually be reduced or eliminated by conservators employing gentle, gradual procedures that preserve the surface characteristics of the sheet. In addition to light pressure, controlled amounts of moisture and humidity are also often used.